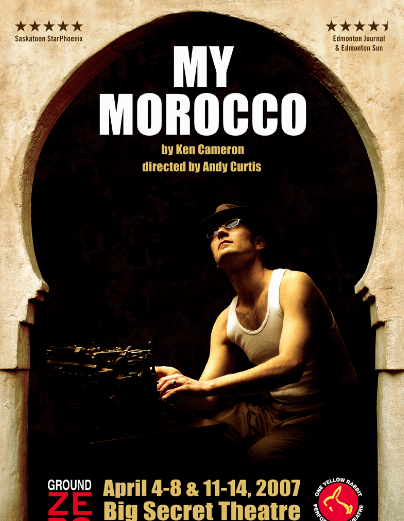 My Morocco is a one-man autobiographical play based on real life incidents that occurred when Ken was traveling in Morocco and discovered that his estranged sister had passed away in Canada.

In its original fringe incarnation Ken appeared onstage and told the story frankly and honestly with only a few photos on music stands and a rich sound design. For the Calgary remount Ken introduced projections of photos of Morocco taken by his wife Rita. Currently rights are available to other performers.

The play provides a frank and emotional narrative of Ken’s sometimes difficult relationship with his deceased sister and his struggles to come to terms with her death. At the same time the play debates the ethical question of whether it is appropriate to tell the story of a deceased person and takes the playwright himself to task for exploiting memory. In this way the play paints a portrait of the artist’s mind and conscience at work.

My Morocco played to sold-out houses at the Edmonton Fringe Festival. In the original production, Ken acted onstage for the first time in fifteen years and was praised by critics for his “killer embodiment of William S. Burroughs.”

Solo shows use simplicity to be complex – Edmonton Journal

In 2004 Ken Cameron and his fiancé, Rita Bozi, went to Morocco to visit a friend. George Bush had just invaded Iraq the year before and both relished the opportunity to visit a Muslim country and check out for themselves these Islamic people who were making the news.

Ken was in the country for about a week when he called home to let his parents know that he was safe. They were at the funeral home. His sister had died unexpectedly. The thing is … Ken and his estranged sister had not spoken in two years.

Along with the shock comes the horrifying reflex in his playwright’s brain that says, “Hey, this would make a really good play.” Filled with regret and shame, unable to return home for the funeral, Ken is forced to grieve in a country of strangers, surrounded by cockroaches and suffering from constipation.

Through a series of flashbacks Ken travels through time and in and out of memories of his sister. Along the way he hallucinates a meeting with William S Burroughs, the famous beat poet and author who offers drug-induced advice, and meets Ibrahim, an Arabic carpet salesman whose passion for life both scares and inspires him.

Productions of this short version were performed with professional actors at Solo Collective in Vancouver and The Gateway Theatre in Edinburgh later that year.

A full-length version of My Morocco was commissioned by Ghost River Theatre in the fall of 2005, with funding from the Alberta Foundation for the Arts, and was partially developed through Ghost River Theatre’s Monday Night Storytelling class.

The majority of the play was written on a slow boat going down the Mekong River in the People’s Democratic Republic of Laos.

The shaping and crafting of the stage version took place under the expert guidance of Andy Curtis, and premiered at the Oh Solo Mia Festival in April, 2006.

The Desert Bus Company, our own little production company, toured the play to the Winnipeg, Saskatoon and Edmonton Fringe Theatre Festivals and the play evolved into its present form on that tour. The play received a five-star review in Saskatoon, was sold out in Edmonton and held-over at the Varscona Theatre, Edmonton.

My Morocco was presented in Calgary by Ground Zero Theatre in association with One Yellow Rabbit.

My Morocco was presented at the Sunset Theatre in Wells, BC.