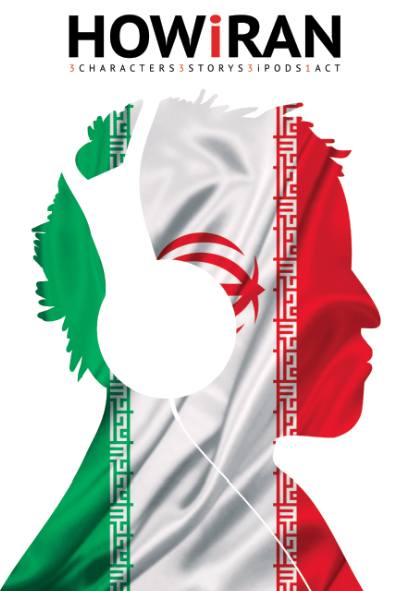 Welcome to an interactive, site-responsive, non-linear installation-story set in a library.

Choose one of three iPods and follow one of three audio tracks through the stacks, into the basement, up the stairwells and out the windows of your city’s library. Artwork and installations created by members of the Canadian-Iranian community are strategically placed throughout the building to augment the audio experience. Each iPod is set to shuffle, so each story is randomly tailored to you and you alone. With over a million possible story combinations, you are guaranteed a unique experience.

Join us daily for “Act Two” – a facilitated discussion that allows you to debrief your unique experience, to compare notes with other spectators and to piece together the story of what happened in this fictional library and why these figures still haunt its walls.

This fictionalized account based on interviews with over twenty new Canadians and one prisoner of conscience. Developed with funding from Calgary 2012 and the Canada Council for the Arts Inter- disciplinary Program.

The following are three different and true stories covering a period from 1970-2012 that are woven together for the installation:

Ramin fled Iran in the midst of the Iran-Iraq war in the mid-1980’s and attempted to claim refugee status in Russia, Denmark and Sweden but was turned down each time. Fed up, he purchased a fake passport and flew to Canada in 1995. The next decade saw Ramin work as a security guard at a library while attempting to navigate Canada’s byzantine immigration system and bring his wife and son to Canada from Iran. During this time he met and fell in love with Emily, but was forced to break off the affair upon the immigration of his family. The effort to rebuild a life drained him physically and emotionally and left him exhausted and stuck in his life as a security guard.

The second story is about Emily who emigrated from the USA to Canada with her black draft-dodger boyfriend to escape the Viet Nam war draft. Together they had a child, but due to a mental breakdown he left his family. Unlike Ramin, Emily’s education was recognized and she was welcomed as a citizen. Even after her affair with Ramin ended, Emily remained fond of him and attached to his son, Hossein.

Hossein met his father at the age of fourteen when he arrived in Canada from Iran. The next week, Hossein began to attend school in Canada, with passable English but little cultural support. Hossein developed a keen interest in computers and developed this skill using the Computer Lab at the local library where his father and friend Emily worked. As a student Hossein began to explore the newly emergent blog technology connecting him to readers of English in Iran and he developed a passion for the truth. Against his father’s wishes Hossein pursued a degree in Journalism (instead of engineering or medicine).

After 9/11 Hossein felt it was vital to communicate to his readers in their native Farsi, and he found a way to combine Blogger’s free online tools with Unicode’s ability to make characters in any language and he became the first person in the world to blog in Persian. Shortly thereafter he distributed a How-to Guide on the internet and Hossein started the blogging revolution in Iran that now numbers 700,000. Upon a visit to Iran in 2008 Hossein was arrested and held without trial for 400 days. After global protests from Amnesty International, Journalists Without Borders and the Canadian government, Iran finally acquiesced to putting Hossein on trial … and subsequently sentenced him to 19 ½ years in prison. For blogging.

The story ends with Ramin returning to Iran in an attempt to rescue his son, and Emily pleading with him not to risk it.

ABOUT THE USE OF TECHNOLOGY

In How iRan spectators will be asked to chose either a red, green or white iPod upon arrival that is pre-loaded with sounds capes, dialogue and instructions. Each of the colours represents a narrative thread that follows either Ramin, Emily or Hossein. They will proceed to listen to the iPod while navigating the library’s upper and basement levels.

But not all iPods will have the same content, and no single spectator will have enough information to piece together the entire narrative. Further, each iPod is set to shuffle, so they each experience the scene in a non-linear order.  Slowly, spectators will come to realize that they have each had a vastly different experience from one another. The final act of the performance occurs in the social time following the experience where spectators compare notes to piece together the story of what happened in this fictional library and why these figures still haunt its walls.

Patrons will be able to navigate the installation during set daytime hours like with a regular art installation: however, audiences will be further invited to attend at specific show times and attend the facilitated discussion (Act Two) which follows.

Ken was invited to participate as a member of the International Jury for the 30th annual Fadjr Festival in Tehran. While in Tehran he saw over 27 theatre productions and befriended many Iranians. Crucially he met Hossein Derekhshan, “the blogfather.”

The day after Ken’s return from Iran he travelled to the Banff Centre for the Arts to participate in a two-week program about writing for new media. In(ter)ventions: Literary Practice at the Edge is a groundbreaking residency that enables experimentation and creation in innovative writing practices. Here the basic structure of the piece is laid out.

With support from Calgary 2012 and The Canada Council for the Arts, Ken begins writing the text of How iRan and conducts interviews with individuals who will become the models for the characters.

Ken travels to Kitchener Ontario, and with the assistance of the MT Space Theatre, Ken interviews 15 members of Kitchener’s Iranian community. All are extremely generous with their stories, but due to the political nature of HowiRan many of these individuals wish to remain anonymous.

In Toronto Ken works with a number of actors to record the dialogue. Due to the political nature of How iRan many of these Iranian actors wish to remain anonymous.

Ken travels to Kitchener and conducts a visual art workshop with members of the local Iranian community. Many of these works will be incorporated into the final project alongside the work of Anton de Groot.

How iRan premieres at the IMPACT Festival in Kitchener.

How iRan receives its Alberta premiere in the High Performance Rodeo.