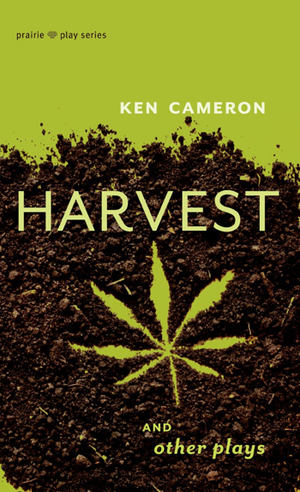 Harvest is based on the real-life experience of my parents, who owned a farm in southwestern Ontario. They recently moved from the farm to the city and rented the house I grew up in to a lovely couple … who used the house to grow marijuana! The event was both deeply disturbing and very comic for them, and they showed great perseverance in dealing with the incident.
The play has been written for two actors, who play the elderly couple, as well as every other character. Like with improv, watching the actors take on all the various roles provides as much joy as the unfolding of the story.

Two-hander reaps a delightfully full Harvest – The Globe and Mail

“An honest crop of comedy”

Act One opens in the raspberry patch as Allan and Charlotte wait for news on the fate of their house. To pass the time they bring the audience up to speed on what has happened with them, the house and their farm, taking on all the roles as required.

They begin by describing the need to sell the farm, then introduce us to their Hungarian neighbour Istvan. They sell the farm to Istvan for less than they were hoping, because he wants only the farm, not the house.

Allan and Charlotte move to a condo in the city and attempt to rent out the house where they raised their children. A young airline pilot named Ron rents the house; he is kind and outgoing, and the elderly couple do not suspect a thing.

…they knock on the door one day to find the house deserted. Frightened out of their wits they explore the house and discover it has been devastated. When the police come, it is explained to them that “Ron” likely used the house as a grow-op.

Their only hope is an environmental assessment, which brings us up to the present moment. It is while awaiting the fate of their family home that Allan and Charlotte realize that this adversity has brought them closer together than ever, and has allowed them to rediscover their love for one another.

Ian Prinsloo, formerly Artistic Director of Theatre Calgary and currently freelance director, was the dramaturge in a successful development workshop.

Harvest was produced by Lunchbox Theatre, Ian Prinsloo director. The headline for the review in The Calgary Herald read “Harvest yields Comic Gold”. The review itself was equally favourable.

Harvest won the 2007 Enbridge playRites Award, which provided funds to allow for a workshop the play at a location of the playwrights’ choosing.

Harvest received support from the Canada Council for the Arts and the Alberta Foundation for the Arts, allowing Ken to expand the play from one act to two acts.

A two-act version of Harvest was workshopped and received a public reading by The Ship’s Company Theatre in Parsboro, Nova Scotia featuring Charlie Rhindress and Gay Hauser. Dedicated to new work, The Ships Company has been bringing new work to rural Nova Scotia for over two and a half decades.

The prestigious Blyth Festivalin Ontario produced the world premiere of the two-act version of Harvest. Founded in 1975 to produce theatre that reflects the culture and concerns for the people of southwestern Ontario and beyond, The Blyth Festival has become one of the very few, if not the only, “500-seat” theatre in Canada producing Canadian plays exclusively.

Harvest has been widely produced across Canada including*:

There have been a lot of productions over the years. So many that we now believe Harvest to be the most produced play by an Alberta playwright of the 21st Century.

* If I have inadvertently omitted your production please be sure to contact me and I’ll add your name to the list.

Harvest is contained in the book Harvest and Other Plays published by NeWest Press.