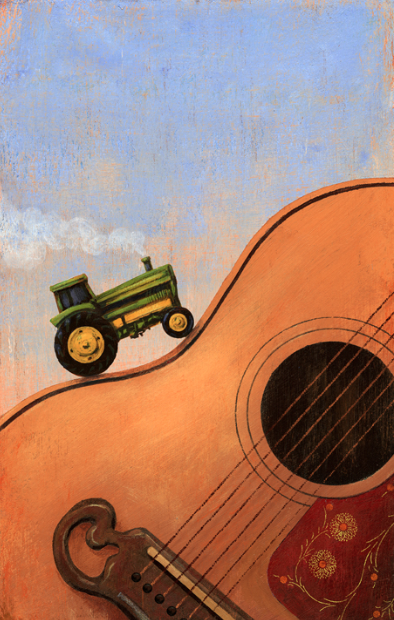 Dear Johnny Deere weaves the tale of Johnny and Caroline, a struggling farming couple, around the music of Canadian alt-country icon Fred Eaglesmith. It opened at The Blyth Festival in June 2012. Because Ken researched Fred Eaglesmith’s songbook extensively, he was able to draw the characters and plotline from the many stories embedded within Fred’s songs. The result is a musical where Fred’s hit songs seem tailor-made to the musical, not the other way around.

Dear Johnny Deere is a hit with many devoted Eaglesmith fans, known as Fred-Heads because of their willingness to be repeat concert-goers. Fred-Heads are the first to buy tickets and to champion the show to new audiences, but because of the skillful marriage of song and story, the play appeals equally to those who’ve (God help them!) never heard of Fred.

It is written for four actors who join the musicians onstage to play additional instruments and provide back-up singing as needed. As a result the musical is very economical to produce. The original production employed only two additional musicians, one of whom was the musical director.

Four musicals on play in Charlottetown: why not Toronto? – Toronto Star

Charlottetown 4, Toronto 0. That’s the score on Canadian musicals this summer according to Richard Ouzonian, one of Canada’s most read theatre critics

“Script and Songs, Cast and Crew Steeped in Canadiana”

Phillip Bast put together this short promo video about Dear Johnny Deere in advance of the 38th Blyth Festival season on June 22, 2012.

Dear Johnny Deere is narrated by MacAllister, the cantankerous local newspaperman and busybody. MacAllister introduces us to his neighbours, Johnny and Caroline, whose marriage is already in trouble. While in front of the liquor store Caroline meets Mike, an old flame, who is now attempting to buy up land in the area in advance of the building of a new super-highway. MacAllister is worried about the impact the highway will have on the town.

Back on the farm, Caroline confronts Johnny about a stack of unpaid bills she has discovered. Johnny is suspicious because Caroline is dressed for a night on the town. After their fight, MacAllister takes us on a flashback and introduces us to Johnny’s father, Hendrick, demonstrating the importance of the farm and the beat-up John Deere Tractor out back. In the present, Caroline sleeps with Mike after a night at the Last Chance Saloon.

Johnny has a dream in which it’s revealed that Mike has been trying for more than a week to convince him to sell the farm. MacAllister shares a second flashback with us, and shows us Johnny and Caroline when they first met and fell in love. That bucolic image is shattered when Caroline comes home the morning after her affair with Mike, to find Johnny cleaning a gun he has “borrowed” from MacAllister. As their fight escalates, Johnny and Caroline discover MacAllister eavesdropping. The act closes as they discover the fields have flooded and their crops have been lost.

Act Two begins with a tense stand-off between Johnny, Caroline and MacAllister, just as Mike arrives. Johnny agrees to sell the farm to him—Caroline moves out. MacAllister pledges to mind his own business. MacAllister shares a third flashback in which Hendrick is killed by the beloved antique tractor. Caroline provides emotional support to Johnny and he proposes on the eve of the funeral. Caroline agrees to marry him … on the condition that he opens up about his feelings.

Returning to the present, MacAllister shows us that Johnny’s critical promise, and his failure to keep it, is what has ultimately lead to the failure of their marriage today. Johnny’s decision to sell the tractor to an antique dealer after Caroline has moved out seems the end of an era on this farm.

Weeks pass in this stalemate before MacAllister has a chance meeting with Caroline at the Last Chance Saloon and discovers that Mike was nothing more than a fling. The real issues in the marriage are much deeper. That same night, he finds Johnny sleepwalking through town calling for rain, for escape, and for his lost wife. Seeing Johnny in this state prompts MacAllister to interfere once more.

In the play’s conclusion, all four characters are brought together in a conflict that sees Johnny threatening Mike with the gun. Only by reminding him of his promise to share his feelings, does Caroline diffuse the situation and restore calm. Together they agree to try the long road towards repairing their marriage and inform Mike that they do not wish to sell after all.

Fred-Heads will find many of their favourites in the musical.

I Wanna Buy Your Truck

Time To Get A Gun

Wilder Than Her Reprise

Calgary actress Esther Purves-Smith introduced Ken to Fred Eaglesmith. The two had filmed the made-for-TV movie The Gift based on the O. Henry Story, The Gift of the Magi years earlier and had remained friends. During that time, Esther wrote a song called My Friend Fred. Fred wrote a song called Me and Esther which can be found on The Official Bootleg Series: Volume 1: Live 2002.

“One condition,” Fred said. “I hate theatre – I don’t want to have anything to do with it.” Having basically been given carte blanche to do whatever he wants with Fred’s material, Ken gleefully proceeds.

Dear Johnny Deere was commissioned by The Blyth Festival and Artistic Director Eric Coates. Founded in 1975 to produce theatre that reflects the culture and concerns of the people of southwestern Ontario and beyond, The Blyth Festival has become one of the very few (if not the only) 500-seat theatre in Canada producing Canadian plays exclusively.

Dear Johnny Deere receives a one-week residency at Lighthouse Theatre in Port Dover Ontario. Ken, Eric and David are joined by a talented cast that includes Cam MacDuffee, Rebbeca Auerbach and Jeff Culbert. This residency is particularly special because Port Dover is Fred’s hometown and he holds a special place in the hearts of the Lighthouse Theatre audience. Feedback from this audience is a critical test of the play’s authenticity.

Fred finally sees the show at Lighthouse Theatre in Port Dover. Loves it.

“It’s like an old high school jacket,” Fred says. “Also, kinda creepy, seeing someone onstage who looks and sounds so much like me.”